Written by Daniel Villarreal on April 8, 2016
Be first to like this.

Why we’re covering this: As history buffs and music lovers, we’re excited about this upcoming concert — it shares an empowering piece of gay musical history with the whole world.

On June 6, 1981, The San Francisco Chronicle reported a rare lung infection in five gay men from Los Angeles. All five had what would later be called Acquired Immune Deficiency Syndrome (AIDS). Over the next 15 years, AIDS would claim the lives of more than 362,000 Americans — over 200 of them would be active members of the world’s first openly gay chorus, the San Francisco Gay Men’s Chorus (SFGMC).

By 1996, the epidemic had taken a toll on the group. Their music and rehearsals had become more somber: they began performing AIDS requiems, singing at the bedsides of dying friends and listing deceased chorus-members as part of the chorus’ “fifth section”. After rehearsals, members would visit sick friends in the hospital and advise each other on where to find clinical drug trials, offering love and support when their own families had turned them away.

For well over a decade, gay men had faced demonization by the religious-right and exclusion from mainstream TV and film. And now they faced new forms of discrimination through the U.S. military’s “Don’t Ask, Don’t Tell” policy and so-called “family values” groups seeking to ban same-sex marriage.

Sensing a need for healing, SFGMC conductor Dr. Stan Hill commissioned poet Philip Littell and composer Robert Seeley to create a work about gay men’s lives and the bravery required to love authentically and without shame. 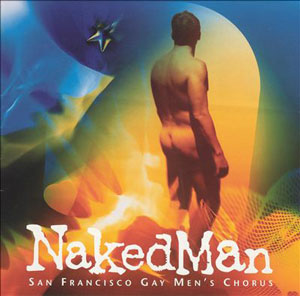 Together, Littell and Seeley interviewed members of the San Francisco Gay Men’s Chorus about their experiences coming out, finding love, facing discrimination, serving in the military, wrestling with religion, losing loved ones and accepting themselves. They weaved their stories into NakedMan, an empowering, epic collection of anthems ranging in style from gospel and country-western to Gregorian chant and musical theatre, each part evocatively named with titles like “O Disturbing Boy”, “Dance On Your Grave” and “We’re Not Lost, We’re Here”.

At turns moving and melodramatic, playful and haunting, NakedMan literally reduced some chorus members to tears during rehearsals. For the first time, they saw themselves reflected in choir-song, the musical style played by the churches that had once rejected and blamed them for their own suffering. It transformed the Chorus into a different sort of church, one championing love and healing over hatred and fear.

NakedMan premiered on July 1996, and the year marked a turning point in California’s AIDS epidemic as new antiretroviral therapies brought a sharp decline in the number of AIDS deaths. Two years later, NakedMan had been performed over 100 times by more than 30 choruses around the globe. It has since become a mainstay of LGBT choruses.

Far from just being about gay men, NakedMan has proven a spiritual and deeply human work that resonates with anyone who has ever felt like an outsider or cried out against societal injustice with a rebel heart.

In commemoration of its 20th anniversary, the San Francisco Gay Men’s Chorus will perform selections of NakedMan on the evenings of Thursday, April 14 and Friday, April 15 at Louise M. Davies Symphony Hall as part of their spring concert, “Tales of Our City: Our Lives, Our Heroes”. The selections will accompany excerpts from another Chorus commission — the 2013 work I Am Harvey Milk, an oratorio based on Milk’s life and legacy — and stories told by Armistead Maupin, author of Tales of the City, the celebrated nine-part book series which premiered just before the AIDS epidemic.

“I have watched the singers rehearse this music paying homage to our heroes. Some are famous, some are men who sang in the Chorus who are no longer here. I know, having seen the singers’ response to this repertoire, that this set of concerts will so down as some of the most moving experiences of our time,” says chorus’ current artistic director Dr. Timothy Seeling.

“I have shared in their joy and their tears commemorating these lives and the indelible impact they have all had on us.”

To learn more about the San Francisco Gay Men’s Chorus and their upcoming concert, visit www.SFGMC.org.